"These are not good Bugs."
―Van Rook in Kur:Part Two

The Al-Kaseem Firecracker Beetle is very similar to the Bombardier Beetle, with both unleashing chemical blasts from their backside. It was first seen in The Kur Stone:Part One.

The Firecracker Beetle can be far more deadly when used properly. Its blasts are highly flammable but harmless . . . unless ignited. It is a large species of beetle, about the size of human finger, with a blue exoskeleton. This species calls Arizona, USA its home. It has been seen in the episode The Kur Stone:Part One attacking the Saturdays, and in Once More the Nightmare Factory attacking the prison to help Van Rook break out. It is a part of Argost's large Cryptid arsenal. He usually has large numbers of them in his cape, which he unleashes in order to make small explosions, generally on impact with a solid surface. It is shown they are able to become a large ball of them and roll towards enemies, making a huge bone breaking explosion. Sadly, Jay Stephens said that this creature isn't real. It was a misleading description of a known insect. 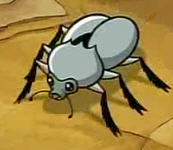 Add a photo to this gallery
Retrieved from "https://secretsaturdays.fandom.com/wiki/Al-Kaseem_Firecracker_Beetle?oldid=19304"
Community content is available under CC-BY-SA unless otherwise noted.