Into the Mouth of Darkness was the fourth episode of Season 2 of The Secret Saturdays. It is the thirtieth episode overall. It premiered on December 5th, 2009.

The Saturdays set a course for Greenland so they can search for an ancient Sumerian tablet, but are forced to take a detour to Australia when the airship gets infested by Bunyip cryptids. Zak finds himself having to keep the secret of his alliance with Argost, while also fighting along side his parents to keep up the charade and locate the monster of the abandoned mine. Leaving the rest of his family in the dust, Zak confronts Argost alone. Realizing from Argost that he was the monster the cryptids were fearing and that his powers had started to corrupt him, Zak lets him escape and hides this revelation from his parents. Meanwhile, Doyle and Van Rook track down Baron Finster in order to uncover the secrets of Argost's past. The duo learns that Argost wasn't always how he currently was: he used to be a completely penniless man. 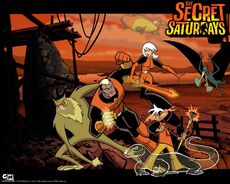 Retrieved from "https://secretsaturdays.fandom.com/wiki/Into_The_Mouth_of_Darkness?oldid=20850"
Community content is available under CC-BY-SA unless otherwise noted.