Weird World is a TV show in the Saturday's universe hosted by V.V. Argost, where he talks about all things cryptid. The show is a huge hit in Japan, which is its number one fan base.

Zak Saturday is an avid fan of the show, despite the fact the he and his family are at odds with Argost.

Cartoon Network has a Weird World website were they have videos of people asked what they know about cryptids. The website has fan mail and the first letter is signed by Zak S. including that it was from Zak Saturdays. It lists three episodes on the website and gives descriptions but no actual videos. The website, weridworldshow.com, is no longer functional.

Episode 1- Does Mongolian Death Worm venom live up to its name? We shall see.

Episode 3- Have an appetite for the bizarre? It's a feeding frenzy in Argost's cryptid dungeon.

On the website, it says that Weird World will be looking at many cryptid artifacts such as a Kraken tooth necklace, Mongolian Death Worm Venom, even the mummified remains of creatures from the past. 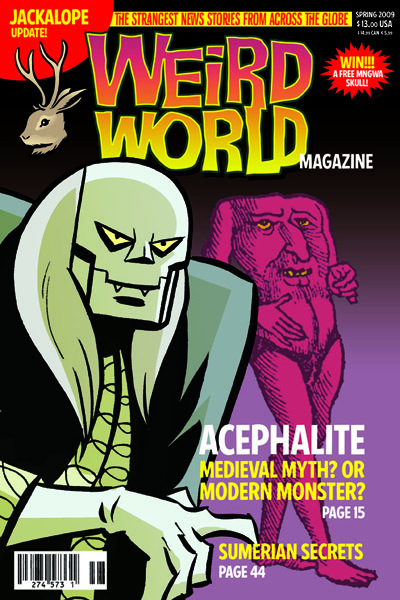 A magazine for Weird World. From top left corner it says Jackalope Update, then to the right of it, it says Strangest news from across the globe, then next to that it gives the price: Spring 2009 $13.00 USA then some words that can't be made out. Next row it says Weird World magazine, then to the right it says WIN! a free Mingwa (a type of tiger like cryptid that has a spiked tail) skull. Near the bottom it says Acephalite Medieval Myth? or Modern Monster? Page 15. Underneath that it says Sumerian Secrets page 44. Then it gives the bar code.

Community content is available under CC-BY-SA unless otherwise noted.
Advertisement